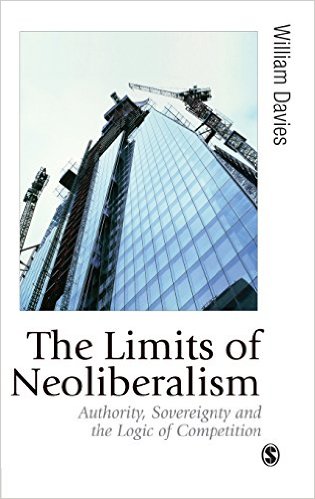 The Limits of Neoliberalism: Authority, Sovereignty & the Logic of Competition was published by Sage in 2014, then reissued with a revised edition in 2016, including a new post-Brexit Introduction and a preface by Aditya Chakrabortty.

Essays and discussions surrounding the book and its themes are collected here. In 2018, it was named by Paul Mason as one of ‘five books to understand the left‘.

“Brilliant… explains how the rhetoric of competition has invaded almost every domain of our existence.”
– Evgeny Morozov, author of To Save Everything, Click Here

“A sparkling, original, and provocative analysis of neoliberalism… a distinctive account of the diverse, sometimes contradictory, conventions and justifications that lend authority to the extension of the spirit of competitiveness to all spheres of social life.”
– Professor Bob Jessop, University of Lancaster

“In a world that seems to lurch from one financial crisis to the next, this book questions both the sovereignty of markets and the principles of competition and competitiveness that lie at the heart of the neoliberal project.”
– Professor Nicholas Gane, University of Warwick